5,800 Americans made sick after being vaccinated against COVID-19

US and UK are biggest holders of Russian government debt

Area of fire at Nevskaya Manufaktura in St. Petersburg has grown to 10,000 square meters

«Immortal regiment» procession in St. Petersburg will take place on May 9

Peskov: there is no crisis in Russia’s economy

Moscow can be covered with snow in early April

Scientists in the Atacama Desert have found the mummified remains of 27 parrots which were flown 900 years ago from the Amazon region across the Andes at an altitude of 3000 m. These parrots had been kept in horrific conditions for the sake of their bright feathers.

The discovery has been published in the journal PNAS.

A detailed study of the mummified parrots showed that they had been transported over 500km: from their habitat in eastern Amazonia to the desert through the mountains. The parrots were caught as adults and kept in cramped cages attached to the backs of pack animals during the journey. The parrots were fed corn and regularly plucked mercilessly to sell their brightly coloured feathers.

Brightly coloured feathers were highly prized in pre-Columbian times throughout South America. The wealthy kept them in special cases, and they were sure to be placed in the owner's grave in the event of his death.

It is a mystery why birds of such value were mummified in such large numbers. Moreover, the mummification was carried out with special care. Archaeologists have studied a total of 27 bird mummies of six different species. Many of the bird mummies date from the period between 1100 and 1450 AD, between the end of the Tiwanaku Empire and the emergence of the Inca Empire. This was a time of war and trade. 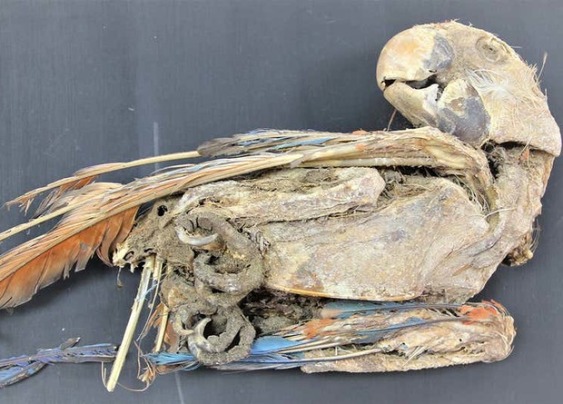