Putin urges officials to solve problems with incomes of Russians

Russian Foreign Ministry: those guilty of killing scientist from Iran should be punished

EC states that Sputnik V will not be used in Europe

37 police officers were injured during protests in France

Mysterious object was spotted in sky over Japan

Trump may take part in presidential elections in 2024

LPR and DPR refuse to exchange prisoners with Ukraine

US accuses Israel of killing one of Iranian bomb creators

In Iran, nuclear physicist Mohsen Fakhrizadeh was killed. The scientist could take part in the Iranian nuclear program.

Israeli Prime Minister Benjamin Netanyahu reported that Mohsen Fakhrizade was engaged in the creation of nuclear warheads and was responsible for developing a nuclear program. According to Fars, close to the Islamic Revolutionary Guard Corps, the physicist was killed in the city of Absard.

Eyewitnesses heard an explosion, and after it a series of automatic bursts. The publication said that the shooting was carried out on a car in which there was an Iranian nuclear physicist.

Iran's state television has already confirmed that the nuclear physicist was indeed killed. Earlier, Mohsen Fakhrizadeh worked in the logistics center of the Iranian Ministry of Defense, holding a high post. In addition, he worked as the head of the Physical Research Center.

Western intelligence noted that Mohsen Fakhrizadeh worked on the creation of project 111 - the Iranian nuclear bomb. Russian media noted that Israeli intelligence services may be involved in the assassination of the physicist. The recent secret visit of Prime Minister Benjamin Netanyahu and Mossad head Yosi Cohen to Saudi Arabia is cited as evidence.

Earlier it was reported that the Israeli army is preparing for a US attack on Iran. Axios noted that the attack could be launched before Donald Trump leaves the post of American leader. 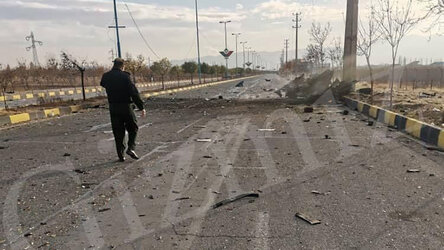